Before I get started, if you’d like a “Quick Link” to the Kickstarter project for the Platypod eXtreme that I mention below, You Can Find It Here. Or just click on the image below: 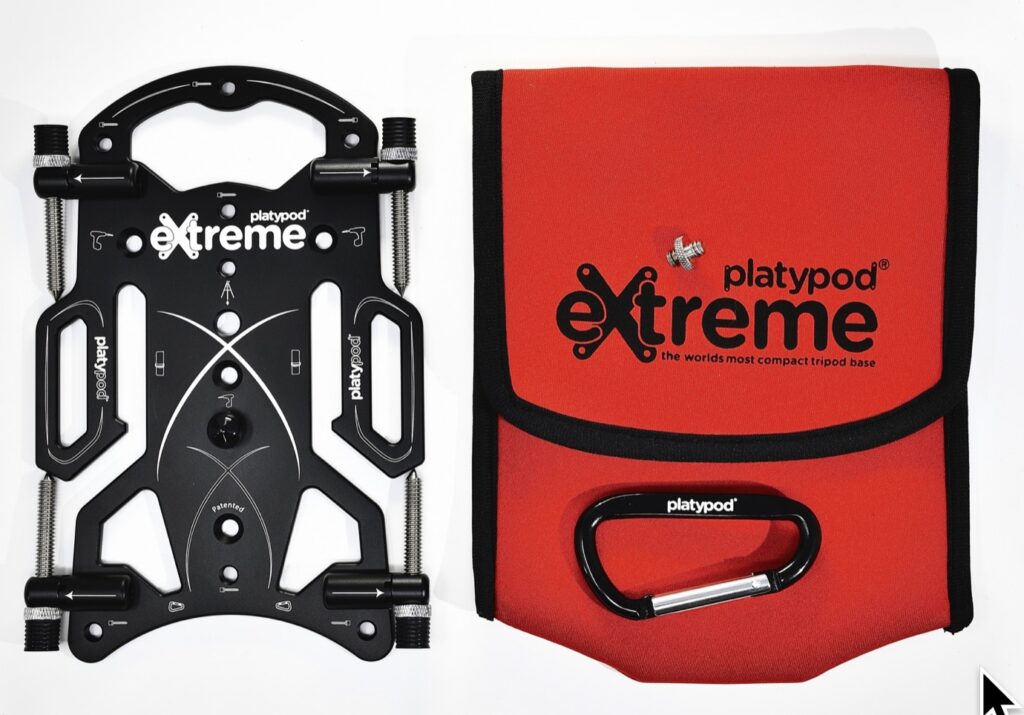 Now for the longer story…

I have great respect for inventors who create products or services that solve their own problems, and then follow-up by creating products and/or services to help others who have similar wants or needs.

The Platypod is described by the company as an “all terrain camera support,” and the best way to see what it (as well as their Platyball tripod heads) can do is to watch some videos of the products in use, like the ones on the company’s website at Platypod.com.

Another great resource is the video replay of a livestream from earlier today on THE GRID with Scott Kelby. On the show, the product was described by Larry Tiefenbrunn, Scott Kelby and photographer Lizzy Gadd. Some of Lizzy Gadd’s incredible environmental self-portraiture was featured throughout the show, as well as some “behind-the-scenes” photographs showing how she used the Platypod eXtreme on location. To say that I was blown away by Lizzy’s work is an understatement!

A replay of the livestream can be found below:

And to see more of Lizzie Gadd’s work, visit: https://www.elizabethgadd.com.

And here’s some more technical information about Platypod eXtreme from the company’s press materials:

Like all Platypods, the new eXtreme utilizes four independently adjustable legs for precise adjustment on uneven terrain, and greater stability than conventional three-legged tabletop and travel tripods. What makes the new model unique is that the threaded legs not only adjust up and down, but also rotate for instant deployment (Editor’s note: Those new rotating legs are a big deal! That’s because of the speed at which they can be deployed compared with the previous models.)

When not in use, the legs fold flat for storage and needn’t be removed. The Platypod eXtreme also features an integrated handle and multiple attachment points for compact lights, extension posts, and other important mobile accessories.

As I mentioned above, the Kickstarter project for the Platypod eXtreme can be found HERE. There is also a special offer for people who back the project during the first 72 hours of the campaign. I always note to my readers that Kickstarter is not a store, and you may want to look over the Kickstarter basics HERE. That being said, the company behind the Platypod eXtreme has always delivered to their customers and their communication to backers, especially during the recent pandemic when some delays occurred, was excellent.

Full disclosure: I received no compensation or products for review from Platypod Pro.

I recently had a chance to see and touch two groundbreaking photo ballheads at Imaging USA 2020 in Nashville, TN called the Platyball Ergo and Platyball Elite. The main reason why I’m excited about them is the way in which they can “lock down” a camera and lens with just a few presses of a button on the front. They also, due to their inverted design, allow you to take panoramic images while keeping the horizon level. The one Platyball prototype that I tested at the show (Platyball Elite) felt very solid when I held it in my hand, and it responded well when I pressed the buttons on the front. I also have to give the manufacturer props for the way they made the Quick Release (QR) work. I’m not a big fan of the way most Arca-type QR systems work, but they’ve designed an elegant turning mechanism that looks to me to be a big improvement.

The best way to truly see how the Platyball works, and why it’s different from all other ballheads, I would highly recommend taking a look at these two videos:

A Note About ALL Kickstarter Campaigns

As Sharky James, host of the PetaPixel podcast always says: “Kickstarter is NOT a store,” so it is possible that you will not receive this product, or anything that you back on Kickstarter. However, based on my experience as a backer of multiple Platypods (another fantastic product which you can find by searching for the word: platypod), I have faith that the company will deliver quality products on time.

Where to Find Out More or Order a Platyball

Because I believe that the Platyball Ergo and Platyball Elite products are worth recommending, I have decided to use the Kickbooster platform to become an affiliate for this campaign, which means that I will receive a small commission if you use my link to visit the campaign site and make a purchase. You can also just search on your favorite search engine for Platyball if you’d prefer not to use my link for any reason. To see the Platyball’s campaign on Kickstarter (Ends Sun. 3/15/2020 at 4:30PM EST) , visit THIS PAGE.

For the last seven years, an amazing bundle of software, e-books and video training has been made available for just 5 Days. It’s called The Complete Photography Bundle from 5daydeal.com and this year, it has an estimated value of just under $3000 for just $89 (there are some upgrades with more content that are also available). Last year was the first year I became a partner with the company who puts the bundle together, which means that I receive a commission on sales when I share my referral link to the main page for the bundle.

Here’s a quick overview image of the people and companies who are contributing:

A $10,000 GIVEAWAY AND A FREE APPLICATION FROM SKYLUM SOFTWARE

Because the bundle is so highly discounted (nearly $3,000 in value for just $89), I believe that if you find just one valuable item from the bundle, it will be worth investing it. Whether or not you decide to purchase the bundle, you can enter a $10,000 giveaway that includes a free copy of a piece of software FOR EVERYONE WHO ENTERS from Skylum Software called AirMagic (here’s a link to a quick overview video tutorial of the application). Just look for the entry form toward the bottom of the 2019 Bundle Page. It looks like this: 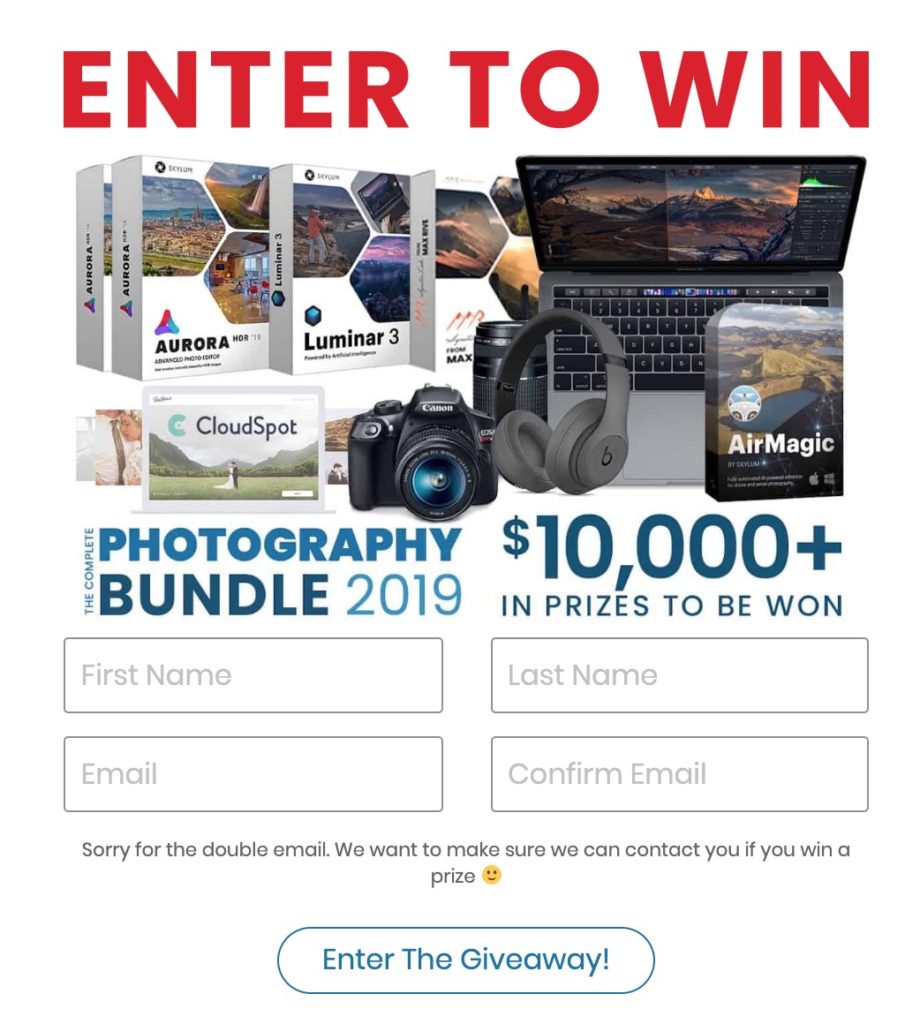 10% of all the proceeds goes to charities (over $1.5 million has been raised thus far), which you can select. I usually choose to give an equal amount to the charities they have selected. About 100,000 people have purchased the bundles over the last seven years, and I’ve bought at least four of them. In a word, the content is AMAZING! If you’d like to check out what’s inside the bundle (and it’s A LOT), visit THIS PAGE.

P.S.: I HIGHLY recommend purchasing a dedicated external hard drive (or making some space on a drive you own) for all of the files that you will probably be downloading if you purchase the bundle. That way, you can move the content from computer to computer and not worry about filling up your internal hard drive (if space is an issue on your internal hard drive(s)). You may even want to purchase two relatively small hard drives (512GB or 1TB) so that you can use one as a backup. They can be found for $50-75 each online or in camera stores/office supply stores like Staples.

Again HERE IS THE LINK to the The Complete Photography Bundle VII 2019. Please feel free to contact me HERE with any questions you may have.

TRENDING ARTICLES
How to Back Up Your Photos: My Podcast Interview with Andrew Hellmich 0 comments
ANDREW DARLOW'S BOOKS: