Whenever a new high-end inkjet printer is released, I am excited to learn more about it and share the news with the world. It’s still amazing to me that humans have created machines that can transform an image from a screen into a piece of artwork on a wide range of different media in just a few minutes.

On October 1, 2019, Epson formally announced two new wide-format printers: the 24-inch Epson SureColor P7570 and 44-inch SureColor P9570. I saw quite a few print samples from one of the printers and saw the SureColor P9570 up close at a press briefing a few months ago. I was extremely impressed by the detail, color saturation and especially the increase in density of the black that’s possible on semi-gloss and glossy papers using the new print mode described in the feature list below. Prints on matte paper were equally stunning, both in color and monotone.

Some of the features of both printers are as follows:

• A new 2.6″ PrecisionCore® printhead, with speeds up to 2.4 times faster than Epson’s previous generation of wide-format printers (that would include the SureColor P7000 and P9000);
• A calibrated LED light inside the area where the head moves back and forth (you can now put your flashlight away!);
• The ability to cover 99 percent of the PANTONE® FORMULA GUIDE solid-coated standard;
• A new print mode called “Black Enhanced Overcoat” that helps create a higher DMAX in the dark areas on semi-gloss, glossy and metallic papers. Here is some text about it from the company’s press materials: “Black Enhanced Overcoat delivers improved DMAX for a wider contrast ratio, excellent black density, outstanding clarity, improved sharpness, and reduced gloss differential on glossy and metallic media.”;
• 12 ink channels with an updated pigment ink (UltraChrome® PRO12), including a violet ink that helps to expand the color gamut; and wait for it…;
• Dedicated channels for matte and photo black! In other words, there is no need to swap between the black inks to optimize the black ink density on matte and glossy/semi-gloss papers.

The last one is a big deal, and something that I always hope for when a new pigment ink printer is released (from any company). I never like waiting for the switch to happen, and I especially don’t like wasting ink (even though it’s a relatively small amount).

To see all the specs for the new printers, including estimated print speeds, and much more, visit THIS PAGE. I was told that the previous generation of wide-format printers will continue to be sold, but I would ask your dealer or contact Epson regarding exactly which models are going to be available for the foreseeable future.

MY 40 DAY EMAIL CHALLENGE IS IN FULL GEAR!

If you are not currently receiving my preferred email news and tips, I welcome you to subscribe HERE. You will instantly receive an e-book with 25 pages from my award-winning photo tips book, Focus & Filter, as well as some Lightroom videos. I’m also in the middle of a 40 Day Challenge in which I’ve been sharing tips and advice on many topics, including inkjet printing, portrait photography, travel and much more. I hope to see you there!

For the last four years or so I’ve purchased this bundle, and for the last two years I’ve been a partner because I believe so much in what the folks at 5 Day Deal do each year. You can save up to 96% on the Photography Bundle 2019 while helping raise hundreds of thousands for charity. The bundle is just $89 for over $2800 in video tutorials, eBooks and digital tools and much more. The opportunity to pick up this bundle ENDS TODAY (NOON PST Tues 10/8). Also Included: Skylum’s AURORA HDR 2019 (a $99 value). GRAB THE BUNDLE NOW and Take Your Skills to the NEXT LEVEL!

It’s truly an amazing time to be a photographer. There is no shortage of incredible tools to edit just about any scanned or digitally-captured image, whether it be a Raw file or many other file types. In September of 2018 I posted an overview of Alien Skin Exposure X3 as well as some of the new features that were coming to Exposure X4. You can find that article here. Recently, the company released Exposure X4.

I was impressed then with the speed and feature set of Exposure X3, and I’m even more impressed now with Exposure X4.5. There are many effects in the application/plug-in that just can’t be found on other non-destructive image editors. 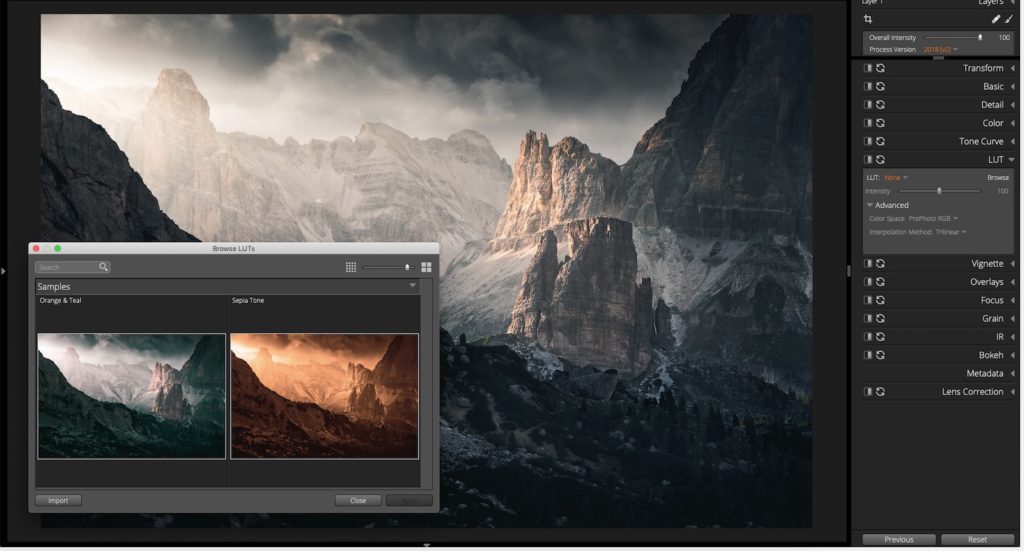 Some of the things that stand out for me in Exposure X4 and X4.5 are as follows:

• LUTs: (short for Look-Up Tables) are small files that allow you to apply certain “looks” or color grading non-destructively to your images inside of Exposure X4. This is an excellent article on the topic that shows a number of examples, with a link to some free downloadable LUTs from Lutify.me.

• Hovering effect for presets is very fast (I tested it on a 2013 MacBook Pro with an i7 Processor). This feature allows you to hover your mouse over a preset, and the image in the center window will temporarily apply that preset, making it very fast and easy to test out different looks.

• The “IR” tools are nothing short of amazing. This tool allows you to create different types of “glow effects” that simulate the look of infrared (or you can use them to just add a softer look) in your images. As they say, you have to see it to believe it!

• The Bokeh tool (used to create creative blur effects) could be an application all by itself. It’s just mind-blowing.

• Tethered Shooting and Non-destructive Layers: Here is a link to a tutorial that shows some of what Exposure X4.5 can do, especially when put in the hands of a skilled image maker:

• User Configurable Keyboard Shortcuts, including one option that makes it easier for Lightroom users to either use Exposure X4.5 as an additional editing tool (standalone or as a plug-in), or for those who want to make the transition from Lightroom Classic to Alien Skin Exposure X4.5.

And here are a few of the newest features that have been added to Exposure X4.5 (from the company’s press materials)

I try to use keyboard shortcuts whenever possible to save time, and two that I constantly use in Lightroom are the “-” and “=” keys to make thumbnails larger or smaller in the Library Module. With that in mind, I was able to change the default keyboard shortcut in Exposure X4.5 for those keys (they were previously assigned to “Toggle Pick Flag” and “Toggle Reject Flag”. Now the keyboard shortcuts match between both applications.

I found the new visual browsing option when copying photos from a card to be very well designed and easy to use. The thumbnails can be made quite large (almost full screen if you like), which is great for quickly making selections. Here’s what it looks like (click on image to see it larger): 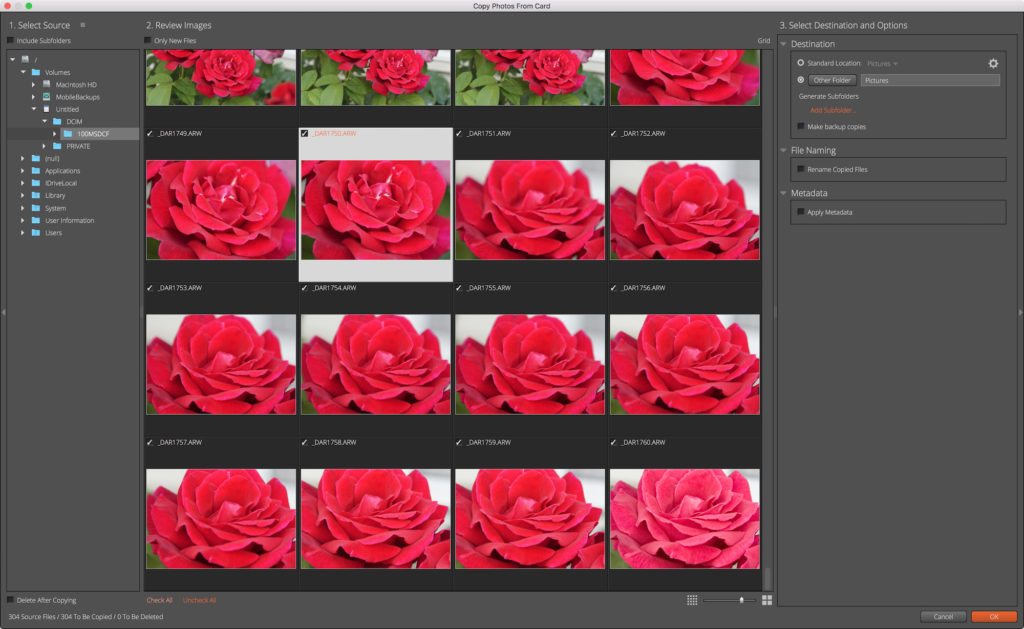 A screenshot from the tutorials page for Exposure X4.5

Alien Skin Software has an excellent collection of tutorials to help anyone get started or hone their skills with their applications. Here is a link to the tutorial page for Exposure X4.5, and here is a link to their YouTube channel.

I would be remiss not to include at at least one screen shot from my testing. I praised this feature in my review of Alien Skin Exposure X3, but this tool never ceases to amaze me. It’s the Overlays panel, and if you like the idea of being able to create a wide variety of custom borders for your images, I would reserve a few hours for yourself to dig in and enjoy! 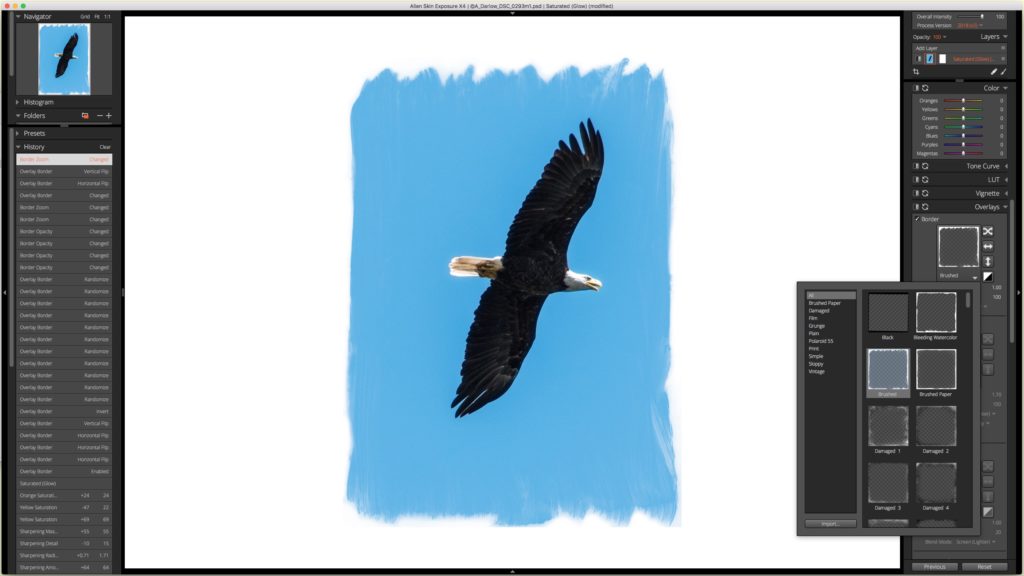 One of my photos being edited in the Overlays panel. Photo © Andrew Darlow

Alien Skin Exposure X4.5 is free to all owners of Exposure X4, and is available in two configurations for Mac and Windows OS:

• Exposure X4 Bundle (US $149), a $50 savings compared with the previous Exposure X3 bundle. It includes Exposure X4, Snap Art, and Blow Up. As I noted in my other article, Blow Up is an amazing application that can enlarge your images quite a bit while retaining good detail and minimal or no visible artifacts. Snap Art’s forte is transforming photos or other artwork in many different ways. Effects include many different looks, including pastel, oil painting and watercolor. For more on Snap Art, visit this page, or see the the video below:

and here is a quick video overview of Exposure X4:

• Re: upgrades, the cost to upgrade from previous versions of Exposure to Exposure X4.5 is $79. The company also frequently releases updates to support the raw files of new cameras, make bug fixes, etc.

I highly recommend downloading a copy of Alien Skin Exposure X4.5 and giving it a test drive. Even if you are happy with your current Raw processing app or other image editor, you may find that some of the tools are well worth the cost of the application. If you’d like to try out  Exposure X4.5 for free for 30 days, visit this page.

DxO Announces Availability of the Nik Collection by DxO 2018 v1.1

I’ve been a longtime user and fan of the Nik Collection. So that’s why I’m happy to see that DxO has continued developing the software after they acquired the rights to develop the software from Google. Prior to Google offering it for no fee for a while (when it was sold by Nik Software), the Collection cost hundreds of dollars, and in my opinion is still worth hundreds of dollars…as long as you use it of course :). The cost of the 2018 v1.1 bundle today is $69. 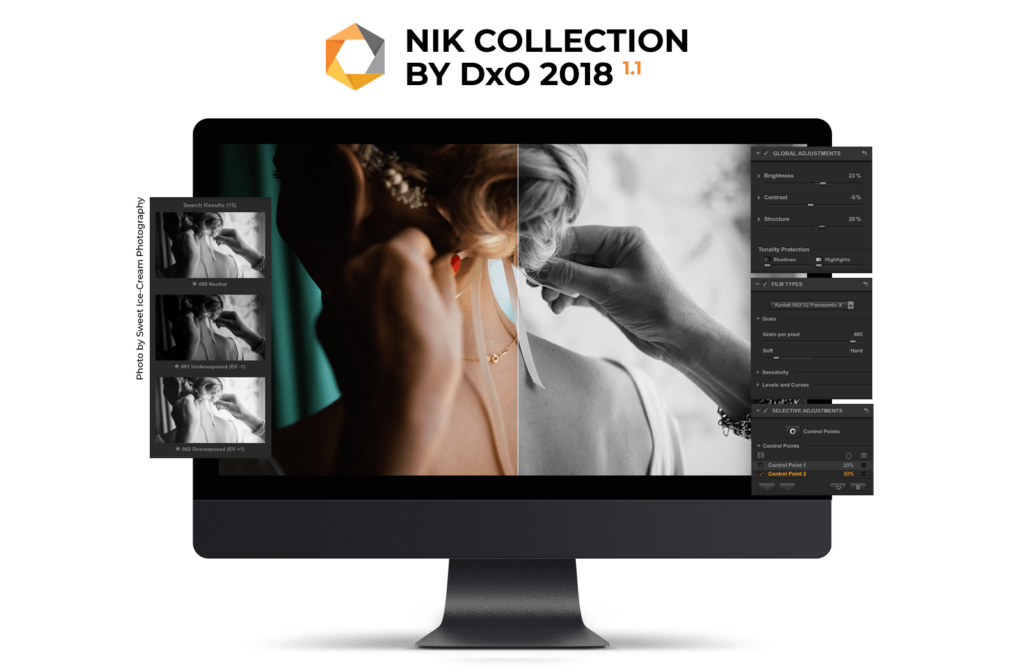 Featured in the latest version of the Nik Collection by DxO are the following seven plugins (Descriptions courtesy DxO):

Nik Collection by DxO can be opened with a number of other programs, including DxO PhotoLab 2, Serif Affinity Photo, Skylum Luminar, and other image processing software that features an export menu to a third-party program (or that’s compatible with Photoshop plugins).”

As I mentioned earlier, the cost of the Collection for Mac or Windows users is US $69 (£59 / €69). Users who purchased Nik Collection by DxO after June 2018 may update their software for free, and you can find a free 30 day trial HERE, as well as link to purchase the collection.

I found this page very interesting on DxO’s website regarding a suggested workflow when using the plugins in the Collection. I generally use only one or two of their plugins for any one image, but it can be helpful to see what they recommend. For many more specific tutorials, I recommend entering the specific plugin name and tutorial into the search bar on YouTube.com. Below is one specific video tutorial by Serge Ramelli that covers both Lightroom and Silver Efex Pro that I found particularly good.

Official technical support from DxO for the Collection is available in the following languages:

And the software is available in the following languages:

As I noted above, the current cost of the Collection for Mac or Windows users is US $69 (£59 / €69), and users who purchased Nik Collection by DxO after June 2018 may update their software for free. You can find a free 30 day trial HERE, as well as link to purchase the Collection.

TRENDING ARTICLES
The Newest Platypod, Platypod eXtreme, just launched via Kickstarter 4/6/2022 0 comments
How to Back Up Your Photos: My Podcast Interview with Andrew Hellmich 0 comments
ANDREW DARLOW'S BOOKS: